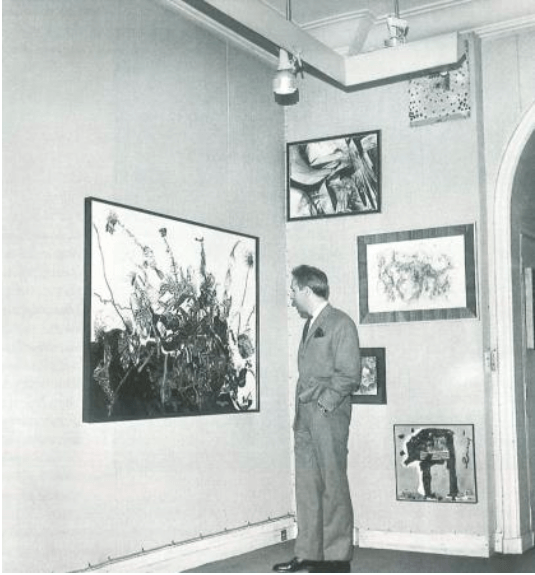 Galerie Alain Margaron is presenting an exhibition paying tribute to Daniel Cordier who died on November 20, 2020 at the age of 100. Margaron collaborated with Ubu Gallery for the works of Bernard Réquichot, Dado and Fred Deux, which we presented in our own tribute to Cordier at FIAC! 2018.

The text from Margaron’s website page honoring Cordier can be read as a pdf in French here or tranlates as follows:

Daniel Cordier, who has just left us, had the stature of a legendary character. “I could organize paid lunches to meet you, I’ll fill the table,” I told him. The joke made him smile. But it was true.

Our relationship was forged around Bernard Réquichot. Cordier, after a generous donation to the Center Pompidou, jealously guarded some very fine works. He was, along with Dubuffet, his favorite artist.

I had to meet Daniel Cordier in order to be able to more effectively defend this powerful, original and fruitful work.

Finally, here he is at the gallery, smiling, mischievous, full of energy. I show him around. A sympathy is created. He tells me he will come back. He keeps his word. He has rarely been to Paris since without tasting the pancakes ordered at the restaurant next door.

We hardly spoke of Requichot at the beginning. He wanted to take the time to test me and got caught up in the game.

He chose four small paintings by René Laubiès to include in his donation to the Center Pompidou. In front of a large canvas of Lunven, he exclaimed to himself: “How come he wasn’t in my gallery, this one?” After having carefully looked at works from the 60s: “Macréau will participate in your fortune!”

During an exhibition by Fred Deux: “What an imagination, what a creation, look, there are not two drawings repeating themselves! I haven’t understood it.” He had been his merchant around 1960, like Dado, whose quarantine he regretted. When it comes to judging artists and their works, Daniel Cordier showed remarkable sincerity.

He found that the galleries had grown cold and impersonal. “What I like about you is that you can tell you like what you are showing.”

Beyond the friendship and the independence of our choice of artists, we had the same love of art and in many ways the same ethics for our profession. I was convinced like him of the need to make a long-term commitment to our artists and to buy their works before offering them for sale; the importance of certain museums in establishing lasting recognition of these artists; and our duty to contribute to the enrichment of public collections.

We finally come to Réquichot. “Do you want us to go see the works in my collection?” he asked me. It was in the southern suburbs near Orly. Daniel, 95, in the middle of a conversation with me, said to the driver, barely looking: “You will take the third on the right, then after passing under the railway….” Former number 2 in the London espionage service at the end of the War, after having assisted Jean Moulin in Lyon, he never took the wrong path.

On the return one, he tells me at length about Dubuffet, first of all how he set his prices: “I had just received three paintings, which were placed on the floor. An American walks in and is ecstatic. He asks me: “How much?” I look at the visitor, I look at the paintings, I look at the visitor again. Am I going to say 1,000 or 10,000? Finally I say 10,000. Response from my interlocutor: “I take all three. Let me know when you have more.” Dubuffet’s prices were fixed, concludes Daniel Cordier.

He confided in me not always to his advantage about his relationship with the artist, answered my questions, even indiscreet, before adding, perhaps to condition me: “In the end, people no longer spoke about more than money. It didn’t interest me anymore, that’s why I closed the gallery in 1964.” This reason convinced me less than others he gave me.

During the lunch which follows this first visit to his reserves, he returns to Requichot’s works: “I agree to sell them to you, but we are not going to talk about money between us. It will be so much for each painting, so much for each drawing.” Both sums were extravagant or, shall we say, highly anticipatory. I do not ask him if he spoke in old francs, remaining impassive, I am still a little annoyed until I learn that he had requested two thirds of this amount from a large museum seven years ago .

He’s the one who calls me back a month later. He forgets his first proposal, we end up agreeing on an objectively reasonable amount. After the check is signed, I ask him if he’s happy. “Yes. You can say that I could have sold them at a higher price, that I gave you the preference because you are the best person to defend them.”

We stayed close, he continued to come to lunch regularly, bought two Laubiès inks from me, while trying to give me the few works by Réquichot he had kept, again at a very high price.

His “dynamism” at his age had finally amused me, I even joked with him.

I owe him a debt of gratitude. He knew that by entrusting Réquichot to me, he was dubbing me, as the many messages of sympathy I have received since his passing show.

Malicious rumors had circulated about the Resistance’s treasury. He told me what really happened and that he had kept a secret so as not to tarnish the image of an important and well-known French officer.

Emmanuel Macron, after presenting him with the Grand Cross of the Legion of Honor, asked the general of the order to take him to Mont Valérien where the last companion of the liberation will be buried. Only one survives him.

Daniel Cordier was a true hero, for whom freedom was more important than anything, deeply human, with fears he overcame during the war and weaknesses he did not hide.

A national tribute, which should take place at the Invalides, will be paid to him on Thursday by Emmanuel Macron who esteemed him very much.