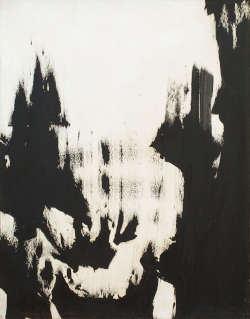 Reigl is recognized as one of the most original artistic figures to have emerged in Europe after World War II. She was, in her own characteristically defiant words, “a woman painter who, for many, paints like a man.” Reigl disregarded the boundaries that prevailed within the avant-garde, obliterating the unitary surface of Modernism by painting on both sides of the canvas and ignoring the presumed antagonism between the non-objective and the figurative. Highly regarded and collected in Europe throughout her 70-year career, Reigl’s first exhibition in the United States was at the Janos Gat Gallery, in New York, in 2007. More recently, her work was included in the exhibition “Epic Abstraction: Pollock to Herrera” at the Metropolitan Museum of Art (2018 and ongoing), and in the Solomon R. Guggenheim Museum’s “Artistic License: Six Takes on the Guggenheim Collection,” in the section of the exhibition curated by Richard Prince (2019).

Judit Reigl was born in Kapuvár, Hungary in 1923. She escaped the Cold War cultural repression of Hungary in 1950, made her way across Europe, mostly on foot, and settled in Paris. There she was joined by Betty Anderson, a young English artist whom she had met on a student trip to Italy in 1947. The pair remained life partners until Anderson’s death in 2007.

Not long after arriving in Paris, Reigl caught the attention of André Breton, who declared one of her paintings a Surrealist masterpiece. Breton presented Reigl’s first solo exhibition in 1954. Reigl promptly rejected the Surrealist affiliation, having already begun to develop her own highly material and emphatically physical painting processes. She would organize her works in chronologically overlapping series. Her practice advanced from explosively gestural paint applications to compositions that began as accumulated paint drippings on floor tarps and were completed by carving and overpainting. Later she painted in a performative dance approach in which she applied paint to a continuous length of canvas suspended from the ceiling around the perimeter of her studio. Eschewing the brush, Reigl would reach for any tool at hand—a twisted length of curtain rod, the facetted stopper from a Chanel No. 5 flacon, … Most of the paintings are non-objective, but now and again, as she put it, of its own accord the human figure would appear. As self-critical as she was independent, Reigl completed well over 3,000 paintings, of which she “approved” perhaps 1,200, choosing to destroy or paint over the rest.

In 2016, the Allen Memorial Art Museum at Oberlin College in Oberlin, Ohio, presented Reigl’s first museum retrospective in the U.S. Her last solo exhibition, “Judit Reigl: Dance of Death” at Shepherd Gallery, New York, in 2018, was a show of memory-inspired drawings by the nonagenarian artist. Reigl continued to make drawings until shortly before her death.