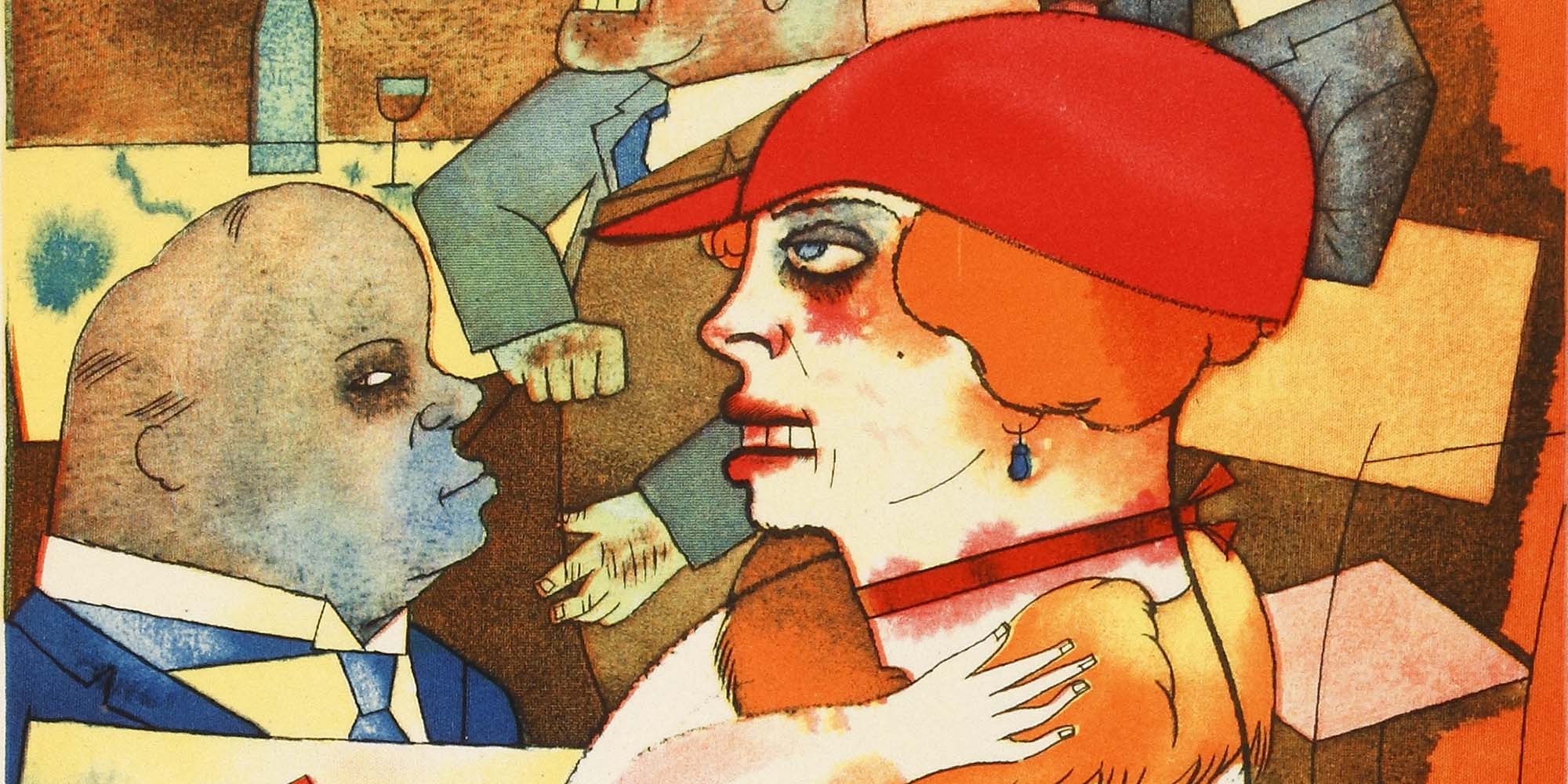 In the post World War I period of acute political polarization, a wide range of visual arts—similar in their realistic representation—emerged in the early 1920s as a “new rational vision.” Loosely referred to as Neue Sachlichkeit or “New Objectivity,” Gustav Hartlaub’s 1925 exhibition of the same name solidified this artistic style into a formal genre. New Objectivity sought clarity and definition through a “matter-of-fact” observation of material reality. The result of this approach was a distanced, sober perspective, in antithesis to pre-war Expressionist, Romantic or an otherwise sentimental rendering of the world. This anti-sentimentality lent itself to the satirical, caricatured and critical grotesque, all falling under the rubric of black humor, “…par excellence the mortal enemy of sentimentality” (André Breton, Anthologie de l’humour noir.)

In addition to wry depictions, from acerbic and sardonic works by George Grosz–chastising all strata of society from the German military to the petite bourgeoisie–to the more reserved, sober mocking by Otto Dix of prostitutes and performers alike, a latent trauma from the recent World War permeated. Most of the artists served in World war I: Beckman was enlisted until a nervous breakdown prevented him from continuing service; Dix, wanting to “experience all the ghastly, bottomless depths for life,” served as a machine gunner; Scholz served for three years and Grosz for one. Militarization is explicit in the exemplary Grosz portfolio, Gott mit Uns [“God with Us”], but also subtly present in works by Scholz and Dix, who, two years following the Zirkus [“Circus”] series on view, would publish his well-known war cycle, Der Krieg [“The War”]. References to death, either in allusion to World War I or to the everyday dangers encountered by marginalized members of the community, are are found among the works exhibited–small coffins, skulls and crosses, decaying prostitutes and cherubs in Pickelhaube helmets.

The majority of the works presented at Ubu were prints, a popular medium during the first few decades of the 20th Century in Germany as advances in machine-made paper increased. Prostitutes, communists, workers and entertainers populate these pieces which often take as their locale city streets, circuses and billiard halls. Whether in the collapsed planes of Beckmann’s cabaret scene or the spatial disruption of Grosz’s Friedrichstraße, a Berlin street frequented by sex workers, movement and modernity are major themes in the works displayed, capturing in their compositions a period of precarious stability.